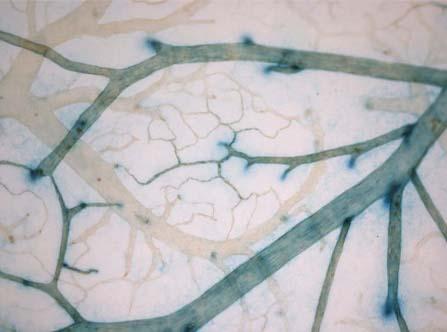 Mouse brain vasculature stained blue for EfnB2 arterial marker
(lectin used for brown background staining)
The Wang lab is interested in the molecular control of blood vessel specification. Our experimental approaches include cell-lineage specific, temporally regulatable gene expression and deletion in mice, combined with cellular, molecular, and two-photon in vivo imaging techniques. We use these tools to examine blood vessel development and maintenance in embryos, vascular diseases including ischemia and arteriovenous malformations, and cancer.

Recent studies from our lab and others have established that the cell surface proteins Notch and ephrin-B2 are specifically expressed in arteries but not veins and contribute genetically to arterial differentiation in embryos. To delineate the genetic programming of artery formation, we have focused on the dorsal aorta, the first vessel formed in the body. We demonstrated that Notch controls the size of the developing artery by controlling the fate of ECs and thus their distribution to arteries. Our data suggest that Notch can promote arterial identity even in specified venous ECs. We also propose that ephrin-B2, which is genetically downstream of Notch, functions distinctively in modulating the size of developing arteries by properly sorting differentiated arterial and venous ECs into their respective vessels. We are currently validating our models by directly monitoring arterial cell fate and migration in live embryos using two-photon imaging.

To investigate the role of the genes important for the embryonic genetic program in the established post-natal vasculature, we expressed a constitutively active Notch in ECs and demonstrated that it induces hallmarks of human brain arteriovenous malformation (BAVM) in mice. BAVM is a condition of abnormal direct connections between arteries and veins that bypass intervening capillaries, with unknown etiology. Our work suggests that Notch signaling may be a causal molecular lesion, and our genetically engineered mice offer a valuable model for this disease. We are investigating BAVM pathogenesis, regression, and therapies using two-photon real time imaging to quantitatively analyze the vascular topology and hemodynamic effects in these mice.

Notch and ephrin-B2 are also present in the tumor vasculature and we are investigating these signaling pathways in tumor angiogenesis. Solid tumors require vascular support for their growth. However, the current study of tumor angiogenesis primarily focuses on the chaotic microvessels of the tumor vasculature, neglecting the fully functional arterial venous system required to transport nutrients and waste. As in human hepatocellular carcinoma, our transgenic mouse model of this liver cancer develops elaborate arteries and veins, and we hypothesize that Notch and ephrin-B2 are crucial for tumor artery formation. We are investigating the function of these genes in tumor artery formation and tumorigenesis by EC-specific inactivation of these genes followed by imaging analysis of both tumor and vessel development. 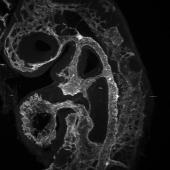 Research in the lab »

Your gift to the Wang Lab helps scientists discover new treatments and cures for vascular diseases including stroke, ischemia, and arteriovenous malformations.